Piper O'Malley has one month to marry or else she'll lose her home. Trouble is, she doesn't even have a boyfriend! Almost immediately her good friend Gabe Rivers steps in. He's the most wonderful man she's ever known, but his proposal has to win the award for the most unromantic of all time! Should she go ahead with a convenient wedding and hope it turns to love...or can Gabe persuade her that his marriage vows will be for real...?

All rugged cattle-station owner Daniel Renton wants is to build a relationship with his motherless daughter. The demons of his past drive him, but when newcomer Lily Halliday comes breezing into town, she's like a breath of fresh air. As he and Lily get to know each other it's clear a bond is forming, but Daniel guards his heart closely. Lily needs to convince Daniel to trust her--because a life with him will be worth the wait....

When Kate Brodie inherits half a run-down cattle station, she doesn't expect to have a sexy cattleman boss to contend with! Noah Carmody doesn't need a city girl like Kate trying her pretty hand at Outback life, but he's a single dad now, and Kate's the only person within a hundred miles who'll help him restore Radnor to its former glory. So he'll grudgingly show her the ropes.... As they toil together under the Outback sun, romance should be the last thing on their minds.…shouldn't it

A former English teacher, Barbara Hannay is a city-bred girl with a yen for country life. Many of her forty-plus books are set in rural and outback Australia and have been enjoyed by readers around the world.

She has won the RITA, awarded by Romance Writers of America, and has twice won the Romantic Book of the Year award in Australia.

In her own version of life imitating art, Barbara and her husband currently live on a misty hillside in beautiful Far North Queensland where they keep heritage pigs and chickens and an untidy but productive garden.

Be the first to review Inheritance - 3 Book Box Set. 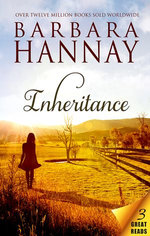