Into the Silent World

by Sam Winston and Jon Clinch

Sam Winston’s WHAT CAME AFTER was that rarest of achievements—a post-apocalyptic adventure that appealed equally to readers of both sci-fi and literary fiction. Despite an unknown author and no marketing budget, WHAT CAME AFTER quickly found an audience and became an Amazon bestseller in a matter of weeks.

Now Winston is back—along with his unassuming hero, Henry Weller—in a big and sprawling sequel, INTO THE SILENT WORLD.

Beginning just moments after WHAT CAME AFTER ends, INTO THE SILENT WORLD follows Weller and his family and his new band of followers as they escape Dr. Patel’s ruined bio station in the Northeastern Empowerment Zone and set out for the safety of Spartanburg. They’re not alone, though. And a virus that killed millions of Americans during the Great Dying is about to be pointed their way with the precision and cruelty that only Black Rose, the nation’s most powerful and secretive private army, can muster.

WHAT CAME AFTER is the Amazon bestseller written by Jon Clinch (THE THIEF OF AUSCHWITZ, FINN, KINGS OF THE EARTH) under his pen name, Sam Winston.

Sam Winston is a fine artist who exhibits internationally and whose books can be found in many special collections worldwide, including New York's Museum of Modern Art, the Getty Research Institute, the Tate Gallery London, and the V&A Museum.

His work is also collected by the Library of Congress and commissioned by the New York Times. Sam lives and works in London.

Be the first to review Into the Silent World. 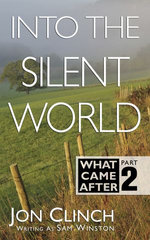 Into the Silent World

by Sam Winston and Jon Clinch