by Sid Moody and Lindsay Smith

A failed corset-maker, fired from his second career as a tax collector, Thomas Paine could never seem to do anything right—until he published Common Sense a pamphlet that would become the first ‘call to action’ in the American Revolution. Former bookseller Henry Knox, stout and strong at the age of 26, drags 59 cannons over ice and snow from Lake Champlain to Dorchester Heights resulting in the British sailing away from six years’ occupation of Boston.

This is the first episode of 1776: The World Turned Upside Down, a 12-episode serial from Serial Box in partnership with The Associated Press.

They were farmers and accountants, high-school dropouts and part-time soldiers, successful merchants and failed corset makers. Yet together they stood together and fought the greatest empire the world had ever known, all for a brand-new idea: America.

A month by month immersive historical account of the Revolution in its first year, this series of twelve installments is unique in its focus on the lives of ordinary colonists and the more personal stories of now famous figures. Through informal and playful storytelling about the events in each month, the series explores the roots of America’s successes and many struggles. We see the beginnings of regional disputes and differences, institutional inequality and oppression, the tension between cultural heritage versus assimilation, and the struggle between states’ rights and federal government, all through the eyes of colonists and militiamen.

The audio series is narrated by Robin Miles with a variety of guest voices including Hamilton star Chris Jackson as George Washington. Installments are being released in synchronized ebook and audio monthly installments from Serial Box throughout 2018. 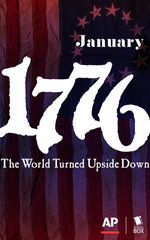 by Sid Moody and Lindsay Smith