Lands of Ice and Blood

A stirring tale of battles and adventure in brutal and distant realms, Lands of Ice and Blood chronicles the further exploits of the Germanii warrior and ex-gladiator Guntram, known to his own people as the War Raven.

Sickened by treachery and seeking a new home far beyond the reach of Imperial Rome, Guntram travels to the ends of the known world and beyond, where he encounters exotic new peoples and faces daunting new foes.

Familiar characters such as the beautiful Wilda are joined by the pitiless reaver - Hakon Blood Axe, Belinde the sensual amazon from the icy northlands who vies for his heart, and a loyal comrade in the shape of Yale the Hunter, as well as a host of intriguing allies and adversaries across the Endless Sea.

Lands of Ice and Blood is the third title in Nick Morris’s Barbarian of Rome Chronicles: War Raven and Fists of Iron are also available as ebooks.

Stowe House's Chief Executive Officer Nick Morris, who has managed restoration work there for the past eight years, has drawn together contributions from leading experts to produce an authoritative work that looks behind the creation of the house, charts the continuing evolution of the site and demonstrates the care taken to ensure authenticity throughout the £40m restoration programme.

As Stowe School's Operations Director from 2009 to 2017, he was closely involved in the School's building projects and management of the site and he now looks forward to completing the restoration and continuing to work closely with the School and the National Trust in that work and in presenting the House to the public.

Be the first to review Lands of Ice and Blood. 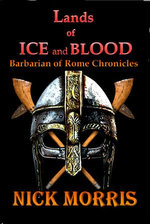 Lands of Ice and Blood

Historical fiction Adventure
Hold on while we process your request.