Laughter: an Essay on the Meaning of the Comic

According to Wikipedia: "In the idiosyncratic Laughter: An Essay on the Meaning of the Comic, Bergson develops a theory not of laughter itself, but of how laughter can be provoked (see his objection to Delage, published in the 23rd edition of the essay). He describes the process of laughter (refusing to give a conceptual definition which would not approach its reality), used in particular by comics and clowns, as the caricature of the mechanism nature of humans (habits, automatic acts, etc.), one of the two tendencies of life (degradation towards inert matter and mechanism, and continual creation of new forms). However, Bergson warns us that laughter’s criterion of what should be laughed at is not a moral criterion and that it can in fact cause serious damage to a person’s self-esteem.This essay made his opposition to the Cartesian theory of the animal-machine obvious."

Be the first to review Laughter: an Essay on the Meaning of the Comic. 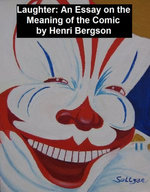 Laughter: an Essay on the Meaning of the Comic