Laughter, the Meaning of the Comic

Laughter, the Meaning of the Comic by Henri Bergson. First published in 1900 by Henri-Louis Bergson (1859–1941) was a major French philosopher, influential especially in the first half of the 20th century.

Bergson convinced many thinkers that the processes of immediate experience and intuition are more significant than abstract rationalism and science for understanding reality. Bergson had a long affair with musicologist Janet Levy which led to her article "A Source of Musical Wit and Humor."

The book success is due partly to the novelty of the explanation offered of the comic, and partly also to the fact that the author incidentally discusses questions of still greater interest and importance. Thus, one of the best known and most frequently quoted passages of the book is that portion of the last chapter in which the author outlines a general theory of art.

One of the functions of humor, according to Bergson, is to help us retain our humanity during an age of mechanization. Like other philosophers, novelists, poets, and humorists of his era, Bergson was concerned with the duality of man and machine. His belief in life as a vital impulse, indefinable by reason alone, informs his perception of comedy as the relief we experience upon distancing ourselves from the mechanistic and materialistic.

Be the first to review Laughter. 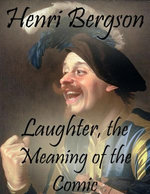 Laughter, the Meaning of the Comic