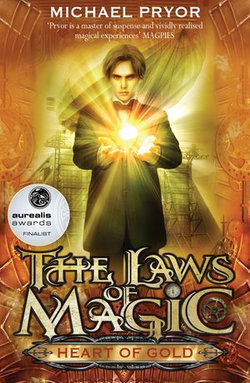 Laws Of Magic 2: Heart Of Gold

Magical genius Aubrey Fitzwilliam is about to become involved in a convoluted series of adventures ... for a change.

At a loss after finishing their exams, Aubrey and George travel to the Gallian capital, Lutetia. Aubrey is pursuing a cure for his condition, but his family have other ideas, and he's soon burdened with a royal mystery to solve, a missing ornithologist to locate and a spot of diplomatic espionage. These tasks should keep Aubrey occupied - but that would be underestimating Aubrey's sense of curiosity and uncanny knack of being in the wrong place at the wrong time.

Someone is stealing people's souls and turning them into mindless monsters. The country's magical lifeline, the Heart of Gold, has been stolen, leaving the city in chaos. And what is the connection with the sabotage of an experimental airship? Aubrey, George and a somewhat reluctant Caroline are on the case . . .

'Michael Pryor is the king of steampunk for teens.' - Visual Bookshelf

Be the first to review Laws Of Magic 2: Heart Of Gold. 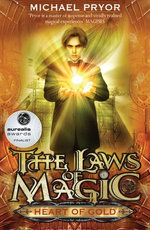 Laws Of Magic 2: Heart Of Gold