Based on a true story of recent events that took place in one of America's most famous small towns. Known for cereal, Battle Creek, Michigan, became world-famous again in July of 2010 when over 800,000 gallons of crude oil were spilled into the river that runs through town, from a pipeline that nobody knew existed, owned by a company no one had heard of.

Leap of Faith is the true story of a small-town news photographer who covered the breaking news story, then began an intensive investigation of the company, the people, the pipeline, the corporate culture, and the CEO of Enbridge, giving her a unique angle on the story.

She expected to find the worst and publish it, to get even with them for the spill and the havoc it wreaked in the community. She found the truth.

Leap of Faith takes you behind the headlines and behind the scenes, providing a revealing portrait of a small town famous for cereal and a major player in the North American energy industry as they both respond to an unprecedented crisis.

Be the first to review Leap of Faith. 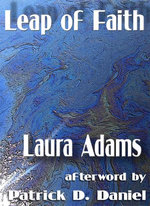 Environmental policy & protocols Biography: general
Hold on while we process your request.