If there's one universal truth, it's this: You're always wearing your worst underwear when you land in trouble.

Along the way, Lola learns a few important life lessons: Never wear a red lace thong to a strip search. Make sure you take motion sickness pills if you're going to the Southern Ocean to save the whales. And sometimes, Mr Right can be all wrong, and Mr Wrong just needs time to find the right path.

Funny, touching, emotional and political, Lingerie for Felons is Bridget Jones meets An Inconvenient Truth, about doing the right thing, finding the right person, and always thinking through your underwear choices.

Be the first to review Lingerie For Felons. 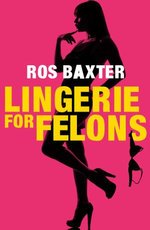