LONGLISTED FOR THE BAILEYS WOMEN'S PRIZE FOR FICTION 2017

It's every mother's worst nightmare. But Ruth Malone is not like other mothers.

It's the summer of 1965, and the streets of Queens, New York shimmer in a heatwave. One July morning, Ruth Malone wakes to find a bedroom window wide open and her two young children missing. After a desperate search, the police make a horrifying discovery.

Noting Ruth's perfectly made-up face and provocative clothing, the empty liquor bottles and love letters that litter her apartment, the detectives leap to convenient conclusions, fuelled by neighbourhood gossip and speculation. Sent to cover the case on his first major assignment, tabloid reporter Pete Wonicke at first can't help but do the same. But the longer he spends watching Ruth, the more he learns about the darker workings of the police and the press. Soon, Pete begins to doubt everything he thought he knew.

Ruth Malone is enthralling, challenging and secretive - is she really capable of murder?

Haunting, intoxicating and heart-poundingly suspenseful, Little Deaths is a gripping novel about love, morality and obsession, exploring the capacity for good and evil within us all.

"Utterly atmospheric and with style to burn, Emma Flint's Little Deaths is a novel that troubles and transfixes from its simmering first pages all the way to its searing final words" Megan Abbott

"I absolutely believed in the setting: the sleaze, the corruption and the glamour. The dialogue is pitch perfect and Ruth Malone is a complex and fascinating character. This is a novel about sex, obsession and discrimination, but it's also a thriller that keeps you guessing until the last page" Ann Cleeves

"A gripping read that is at the same time deeply real. A beautifully written and realized debut. I absolutely loved it." Kate Hamer, author of The Girl In The Red Coat

Be the first to review Little Deaths. 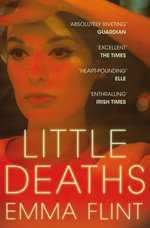