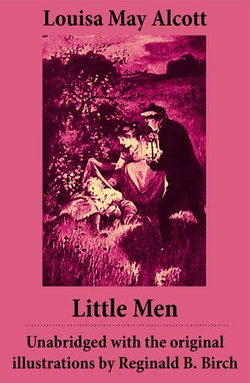 by Louisa May Alcott and Reginald B. Birch

Little Men is a novel by Louisa May Alcott, first published in 1871. The novel reprises characters from Little Women and is considered the second book of an unofficial Little Women trilogy, which is completed with Alcott's 1886 novel Jo's Boys, and How They Turned Out: A Sequel to "Little Men". Little Men tells the story of Jo Bhaer and the children at Plumfield Estate School . Jo—now married to the good-natured Professor Bhaer, and with sons of her own—has become the unflappable matron of an extended family at Plumfield, a school the Bhaers have founded with Aunt March's legacy.

Louisa May Alcott's overwhelming success dated from the appearance of the first part of Little Women: or Meg, Jo, Beth and Amy, (1868) a semi-autobiographical account of her childhood years with her sisters in Concord, Massachusetts. Part two, or Part Second, also known as Good Wives, (1869) followed the March sisters into adulthood and their respective marriages.

Louisa May Alcott (1832 – 1888) was an American novelist best known as author of the novel Little Women and its sequels Little Men and Jo's Boys. She was an advocate of abolition, women's rights, and temperance.

Louisa May Alcott was born on 29 November 1832 in Pennsylvania, and she grew up with plenty of books to read but seldom enough to eat. Louisa went to work when she was very young as a paid companion and teacher, but she loved writing most of all, and like Jo March she started selling sensational stories in order to help provide financial support for her family.

She worked as a nurse during the American Civil War but the experience made her extremely ill. Little Women was published in 1868 and was based on her life growing up with her three sisters. She followed it with three sequels, Good Wives (1869), Little Men (1871) and Jo's Boys (1886) and she also wrote other books for both children and adults. Louisa was also a campaigner for women's rights and the abolition of the slave trade. She died on 6 March 1888.

Be the first to review Little Men - Unabridged with the original illustrations by Reginald B. Birch (includes Good Wives). 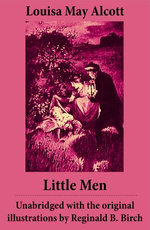 by Louisa May Alcott and Reginald B. Birch