The Dark Angels are the first Space Marine Legion, the honoured sons of the Lion. Striving to atone for a sin ten millennia old, they constantly hunt the mysterious Fallen, and when one of these traitors is in their sight, no enemy or ally is safe from the Dark Angels' wrath. Amongst their number are many great heroes, the likes of Belial and Sammael, masters of the elite Deathwing and Ravenwing companies whose sworn duty is to hunt and capture the Fallen. Along with their Librarian and Chaplain brethren and the Supreme Grand Master Azrael, they are the Lords of Caliban.

The heroes of the Dark Angels take to the battlefield and show why they are the leaders of the Chapter and the Lords of Caliban. Belial, Master of the Deathwing, and Sammael, Master of the Ravenwing, both relive the battles that led to their ascension. Other tales tie in to the Legacy of Caliban series, including a chilling scene from Master of Sanctity shown from another, horrifying, perspective.

Be the first to review Lords of Caliban. 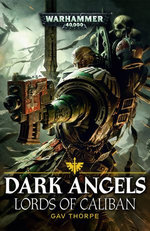