The most startling discovery to never be made. "Sergio Leone would have killed to film Fistful of Reefer. Harry Turtledove would admire the way history has been skewed. Others will love the notion of the Lost DMB Files. The estimable Mr. Brown has really latched onto something here.” ~ Mike Resnick (The Godfather of Weird Western)

Some conspiracies remain theories. Others become obsessions. Exhumed 100 years after their penning, the Lost DMB Files will reinterpret the way you perceive the world… and possibly the way it perceives you.<br />

Dime novelist and pulp fiction writer, David Mark Brown, mysteriously disappeared during the 1930’s. Until recently, his obscure writings had all but been forgotten. Violent conspiracy theorists contend his fiction preserves a secret history, a history able to reclaim our future, if the war it unleashes doesn’t destroy us in the process.

Duplicity is life. Multiplicity is power. Creation mythology has preserved the two basic building blocks of life as “The Tree of Life” and the “Knowledge of Good and Evil.” A select few have come to understand these ancient forces according to their modern scientific labels: the Lost Gene and the Twitch Retrovirus. One enables immortality. The other unlocks the human mind.

For thousands of years, these two foundational elements have been kept isolated…with the exception of an event known as the Great Schism. Since the Schism, eight parallel universes have clashed on a path toward cataclysm or restoration. Only those who envision the Schism can control whose image the universe reflects.

OTHER SCHISM 8 SERIALS INCLUDE:

Be the first to review Lost DMB Files. 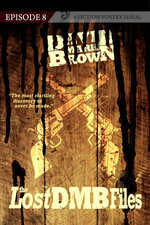 Westerns Historical fiction Adventure
Hold on while we process your request.