Luck of the Irish. A Holiday Heartbeats Story.

Nhu Hoang's tired of putting her needs second to everyone. When her boyfriend reveals he's still not going public about their relationship after nearly two years, she's blindsided. She deserves better, but it's hard letting go.

Jack can't win. Destined to stand in his father's shadow and continue the Smith's political legacy, he doesn't trust himself to do anything that could lead to disapproval. He hates hurting Nhu, but losing his father's favor would destroy him.

Eoghan Kelly knows what he wants, and he came from Ireland to California to get it. Winning the internship isn't a surprise, but falling for the enigmatic barista with her stack of law books is.

When Eoghan learns Nhu's not entirely over her ex, things get complicated. When he finds out her ex is his cousin, Jack, things get messy.

Only one of them can be with Nhu. Will she make the right choice?

Luck of the Irish is the 3rd book in the Holiday Heartbeats series, but each book can be read individually as a standalone.

Be the first to review Luck of the Irish. A Holiday Heartbeats Story.. 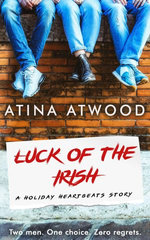 Luck of the Irish. A Holiday Heartbeats Story.