Publish Marguerite, dear Monsieur André Coq, if you so desire, but pray relieve me from all responsibility in the matter. It would argue too much literary conceit on my part were I anxious to restore it to the light of day. It would argue, perhaps, still more did I endeavour to keep it in obscurity. You will not succeed in wresting it for long from the eternal oblivion where-unto it is destined. Ay me, how old it is! I had lost all recollection of it. I have just read it over, without fear or favour, as I should a work unknown to me, and it does not seem to me that I have lighted upon a masterpiece. It would ill beseem me to say more about it than that. My only pleasure as I read it was derived from the proof it afforded that, even in those far-off days, when I was writing this little trifle, I was no great lover of the Third Republic with its pinchbeck virtues, its militarist imperialism, its ideas of conquest, its love of money, its contempt for the handicrafts, its unswerving predilection for the unlovely. Its leaders caused me terrible misgivings. And the event has surpassed my apprehensions. But it was not in my calculations to make myself a laughing-stock, by taking Marguerite as a text for generalizations on French politics of the late nineteenth and early twentieth centuries. The specimens of type and the woodcuts you have shown me promise a very comely little book. Believe me, dear Monsieur Coq, Yours sincerely, Anatole France.

Be the first to review Marguerite. 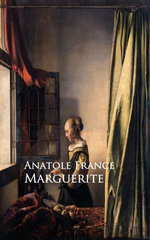