Lucy Telford knows all about heartache — her teenage crush on her friend Gabriel Blake was a crash course in unrequited love — but these days she's determined to make her own happy ending. If her boyfriend won't get down on one knee, she'll just have to ask him herself!

Step one is enlisting Gabriel's help. He's a woman-magnet and can give her some tips on becoming irresistible! But Lucy's perfect plan goes awry when she wonders if she's asked the right man to walk her down the aisle…

Handsome Dr Dane Hendricks certainly isn't nurse Rikki Johansen's usual type. For one thing, she thinks he's arrogant and for another, he assumed she was incapable of making good decisions. So why is he so adamant about taking her on a date?

Rikki soon discovers that Dr Dane is actually a kind and sensitive dad, and, like her, he's one of life's survivors. A foster mother herself, Rikki knows she can bring Dane's adorable twin girls — and their gorgeous dad — the happiness they deserve.

Kyle Landis worked the most dangerous missions, but nothing had prepared him for the surprise of becoming a dad. When Phoebe Slater suddenly announced the child she was caring for was his baby, he had no reason to doubt her. And since a Landis did not sway in his duty, marriage was the only course of action. But once 'I do' was said, would Phoebe be up for enlisting as his wife…in every way Kyle had been imagining?

Be the first to review Marry Me - 3 Book Box Set. 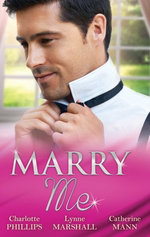