MONSIEUR BERGERET was seated at table taking his frugal evening meal. Riquet lay at his feet on a tapestry cushion. Riquet had a religious soul; he rendered divine honours to mankind. He regarded his master as very good and very great. But it was chiefly when he saw him at table that he realized the sovereign greatness and goodness of Monsieur Bergeret. If, to Riquet, all things pertaining to food were precious and impressive, those pertaining to the food of man were sacred. He venerated the dining-room as a temple, the table as an altar. During meals he kept his place at his master's feet, in silence and immobility. "It's a spring chicken," said old Angélique as she placed the dish upon the table. "Good. Be kind enough to carve it, then," said Monsieur Bergeret, who was a poor hand with weapons and quite hopeless as a carver. "Willingly," said Angélique, "but carving isn't woman's work, it's the gentlemen who ought to carve poultry." "I don't know how to carve." "Monsieur ought to know." This dialogue was by no means new. Angélique and her master exchanged similar remarks every time that game or poultry came to the table. It was not flippantly, it was certainly not to save herself trouble, that the old servant persisted in offering her master the carving-knife as a token of the respect which was due to him. In the peasant class from which she had sprung and also in the little middle-class households where she had been in service, it was a tradition that it was the master's duty to carve. The faithful old soul's respect for tradition was profound. She did not think it right that Monsieur Bergeret should fall short of it, that he should delegate to her the performance of so authoritative a function, that he should fail to carve at his own table, since he was not grand enough to employ a butler to do it for him, like the Brécés, the Bonmonts and other such folk in town or country.

Be the first to review Monsieur Bergeret in Paris. 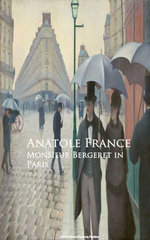