On 2 October 2018, Saudi-royal courtier and writer Jamal Khashoggi was trapped by his palace peers into entering the Saudi consulate in Istanbul. Once there, he was killed in cold blood in the consul-general’s library in one of the world’s most infamous conspiracies of the twenty-first century. His body was dismembered by palace officials in fifteen parts and packed into five suitcases that were left at the consul-general’s home.

Using Turkish sources, Murder in Istanbul reconstructs the execution of the plot in rigorous detail and reveals how the assassination was connected to the president of the United States, Donald Trump, his son-in-law, Jared Kushner, and their orbit — including president of Russia Vladimir Putin – as well as the poisoning of Sergei Skripal and tragic death of Dawn Sturgess in Salisbury. The courtier’s murder had far-reaching consequences and several world figures became the sworn enemies of the brutal de-facto ruler of Saudi Arabia, Salman bin Mohammed, during the aftermath of the conspiracy.

Despite the eye-watering forensic facts that have become public about the devious plot, the most gruesome part of the events at the consulate has yet to come to light.

Be the first to review Murder in Istanbul. 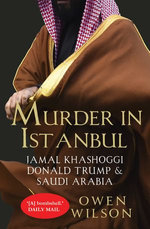