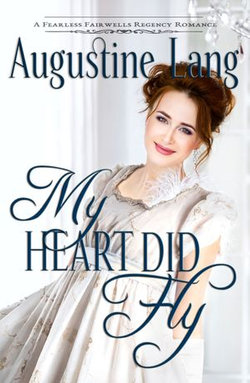 My Heart Did Fly

Will Fairwell, third son and failed clergyman, is good at whist and managing his family’s fortunes. He is not good at being tall, handsome, or keeping quiet for more than six seconds.

Naturally, he’s fallen for the one woman in London who doesn’t want to marry him for his money. He knows a nervy chatterbox like himself has little hope of charming the beautiful, confident Miss Frances MacDougal. But she’s worth being brave for....

Frances MacDougal intends to marry for love—someday. As a girl, she turned down the life of a shopkeeper’s daughter in order to follow the siren call of Shakespeare. Now that she’s a leading lady, she’ll enjoy every second of her success. So the attentions of the rich, respectable, and hilariously awkward Mr Fairwell are a flattering amusement—nothing more!

But not even her career can stop her from rushing home when her father’s in need. And when she arrives in Edinburgh to discover her name in the papers as a possible accessory to murder—and the suspected lover of a killer—she’s stunned. All her efforts to guard her reputation have been for naught.

She knows she shouldn’t be so very pleased when Mr Fairwell offers to pose as her utterly respectable fiancé. Yet she’s spent an awful lot of time taking care of things by herself. Is it so wrong to want someone she can depend on?

And in time, might she accept not just his help—but his hand and his heart?

Be the first to review My Heart Did Fly.

My Heart Did Fly