Charles Dickens’s third novel, Nicholas Nickleby (or The Life and Adventures of Nicholas Nickleby) was first published as a serial from 1838 to 1839. Forced by the untimely death of his father to support his mother, Mrs. Nickleby, and sister, Kate, Nicholas Nickleby encounters characters both great (the Cheeryble brothers) and fearsome (Wackford Squeers), and overcomes adversity to finally find a suitable position, income and love.

Nicholas Nickleby is widely acknowledged to be the first of Dickens’s romances, and it was an immediate success on publication, establishing Dickens’s reputation as a skillful storyteller. Peopled with memorable characters like Uncle Ralph, Smike, and Madame Mantalini, Nicholas Nickleby is the work of a skilled writer at his best. 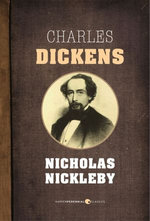