Ryan's past isn't just haunting her. It's trying to kill her.

Ryan McCarthy fled Kimberlyn Island, her father, and her lover six years ago, desperate to build a life away from the weird science and supernatural experiments of her childhood. But everything she hoped to escape comes back with a vengeance when she's kidnapped and tortured by a possessed madman out for revenge on the man responsible for his possession: Ryan's father.

Now, reunited with the lover she abandoned, Ryan is forced back into a world of danger and darkness she no longer understands, pursued by enemies with powers she can't fathom. But Ryan's not entirely powerless herself. She'll have to use every trick she knows—as well as the mystic gift she hates—to stay ahead of those enemies. And that will be easier said than done.

Be the first to review Night and Chaos. 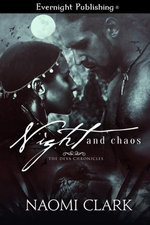