Publishing essays in the age of the tweet is a bit like selling buggywhips next to the car dealership. One would only expect such an activity to be pursued by old fuddy-duddies waving their canes at the kids on their lawns. We are actually huge proponents of social media. The restrictions of 140 characters have brought soul back to wit, and created surprisingly elegant moments of poignancy in the decade since first we tweeted. Still, sometimes, after consuming a cascade of snappy one-liners and cat gifs, one begins to feel as if one's brain hasn't really eaten anything. Like a salad with only salad in it. We crave mental meat. Intellectual protein, to fortify and nourish. We wonder what the incredibly smart and entertaining people we know online would say if they had more space to stretch out, and paid no heed to tl;dr conventions. Consider the songwriting clubs run by people like Matt the Electrician and Bob Schneider. Throw out a title, and by the end of the week, everyone on the list has to have written a song with that title. Why not do the same with prose? The 900-word limit of the essay form is ideal, both for management and digestion. And so, defying the times yet again, this book-form compilation endeavors to extend the lifespan of these compositions beyond their usual expiration date in the ephemerality of the digital ether. And given the momentous times we live in, we hope this may additionally serve as a kind of historical record, alerting future generations to the fact that not all of us who lived in 2016 were completely bugnuts insane. Happy reading.

Be the first to review Notes from the Ameripocalypse. 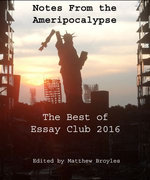