Old Game, New Players (The Witch Who Came in from the Cold Season 2 Episode 3)

This is the 3rd episode in the second season of The Witch Who Came In From The Cold, a 13-episode serial from Serial Box Publishing. This episode written by Ian Tregillis.

As Gabe and Edith uncover clues in their investigation, Zerena proposes a bold plan for the Flame.

A party at the Soviet Embassy brings all of Prague’s players out of the shadows and to the Champagne table – with few old faces making new appearances.

Be the first to review Old Game. 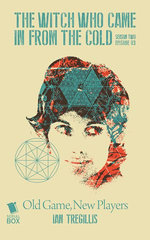 Old Game, New Players (The Witch Who Came in from the Cold Season 2 Episode 3)