The sole survivors of the human race... and their time is running out.

In the wake of Earth’s fall, Peter Alander has just one choice: to use the alien Gifts left behind on his distant colony world to warn other missions of their impending demise, a second wave of alien ships, this time intent on destroying everything in their path. Without the Gifts, humanity would have no hope at all--although no one truly understands them, and it is becoming increasingly certain that the very use of them is what draws the enemy on.

Out of the dark comes help from an entirely unexpected quarter. Peter Alander and his fellow survivors are not the only victims of the terrible Starfish. But what if the cost of that help is too high? What if the price is humanity itself?

Nominated for the Aurealis and Ditmar Awards.

Be the first to review Orphans of Earth. 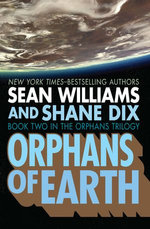