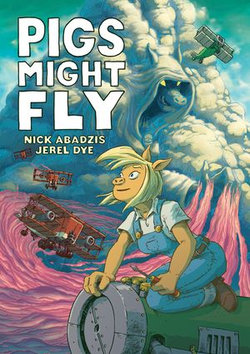 by Nick Abadzis and Jerel Dye

All the sensible hogfolk in Pigdom Plains know that if pigs were meant to fly, they’d have been born with wings—but there’s no convincing Lily Leanchops. The daughter of renowned inventor Hercules Fatchops, Lily has watched her father’s flying machines fail time and time again. Working in secret, Lily is trying to build what her father couldn’t: an aircraft that actually works. And of course, she’s following his example and employing scientific principals alone—not magic. (Well, a protection spell or two doesn’t count, right?)

Lily’s secret project takes on a new sense of urgency when a mysterious enemy emerges from beyond the mountains. The Warthogs are coming, and they’re piloting flying machines powered by dangerous magic spells. To save Pigdom Plains, Lily must take to the skies in her own experimental aircraft—and there’s no time for a test run.

Pigs Might Fly chronicles the adventures of a team of airplane-flying pigs, from knockout duo Nick Abadzis and Jerel Dye.

Nick Abadzis was born in Sweden to Greek and British parents and was brought up in England and Switzerland. He has been writing and drawing comics and graphic novels for all ages for over twenty-five years.

His work has appeared in numerous books, newspapers, magazines and other periodicals around the world and he has been honored with various international storytelling awards, including an Eisner for his 2007 graphic novel, Laika. He also works as a publishing consultant, visual facilitator for corporate business and speaker on visual communication in culture. He lives in Brooklyn, New York, with his wife and daughter. 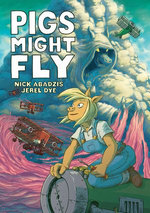 by Nick Abadzis and Jerel Dye