Rape is a fact of life for the incarcerated. Can American society maintain the commitment expressed in recent federal legislation to eliminate the rampant and costly sexual abuse that has been institutionalized into its system of incarceration?

Each year, as many as 200,000 individuals are victims of various types of sexual abuse perpetrated in American prisons, jails, juvenile detention facilities, and lockups. As many as 80,000 of them suffer violent or repeated rape. Those who are outside the incarceration experience are largely unaware of this ongoing physical and mental damage—abuses that not only affect the victims and perpetrators, but also impose vast costs on society as a whole. This book supplies a uniquely full account of this widespread sexual abuse problem.

Author Michael Singer has drawn on official reports to provide a realistic assessment of the staggering financial cost to society of this sexual abuse, and comprehensively addressed the current, severely limited legal procedures for combating sexual abuse in incarceration. The book also provides an evaluation of the Prison Rape Elimination Act of 2003 and its recently announced national standards, and assesses their likely future impact on the institution of prison rape in America.

Be the first to review Prison Rape: An American Institution?. 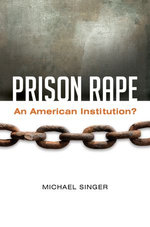