What is the Liberal Party's core appeal to Australian voters? Has John Howard made a dramatic break with the past, or has he ingeniously modernised the strategies of his party's founder, Sir Robert Menzies?

For Judith Brett, the governmeant of John Howard has done what successful Liberal governments have always done: it has made its stand firmly at the centre and presented itself as the true guardian of the national interest. In doing this, John Howard has taken over the national traditions of the Australian Legend that Labor once considered its own.

Brett offers a lucid short history of the Liberals as well as an original account of the Prime Minister, arguing that, above all, he is a man obsessed with the fight against Labor. She explores both his inventiveness in practising the politics of unity and his great ruthlessness in practising the politics of division. She incorporates fascinating interview material with Liberal voters, shedding light on some of the different ways in which the Liberals appeal as the natural party of government.

Full of provocative ideas, Relaxed and Comfortable will change the way Australians see the last decade of national politics.

‘Where Keating spoke to the nation, Howard spoke from it - straight from the heart of its shared beliefs and commonsense understandings of itself.’ —Judith Brett, Relaxed and Comfortable

‘Judith Brett's essay is important because it makes no attempt to lionise or demonise John Howard. It seeks merely to examine the reasons for his phenomenal run and does so with great precision.’ —Graham Richardson

‘Brett's is a sober analysis and not one of moral outrage. The essay represents a challenge to the leftist sense that under Howard, as Chicken Licken said, 'The sky is falling!’ —David Corlett

‘Judith Brett has once more shown herself to be one of the foremost commentators on the Liberal Party's political role. It is really the fact that her essay is so good that has prompted my response.’ —David Kemp

Judith Brett is professor of politics at La Trobe University and one of Australia’s leading political thinkers. She is a former editor of Meanjin and columnist for the Age. She is the author of the award-winning Robert Menzies’ Forgotten People and Australian Liberals and the Moral Middle Class: From Alfred Deakin to John Howard (2003), which was shortlisted for the Queensland premier’s prize for non-fiction.

Be the first to review Quarterly Essay 19 Relaxed and Comfortable. 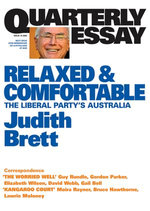