Gabe makes an elemental discovery, while Tanya and Sasha play cat-and-mouse in the gripping new chapter of The Witch Who Came in from the Cold, the episodic online serial set in an alternate Cold War Prague where magic mingles with espionage.

Gabe's efforts to learn about his supernatural hitchhiker finally pay off . . . but a little knowledge can be a dangerous thing. His options dwindling, he turns to Tanya – but she needs help of her own as her confiscated radio raises questions with the KGB. Meanwhile unexplained deaths spark concern in the intel communities and rumors of golem sightings have the citizens of Prague on edge.

This episode is brought you by Ian Tregellis, who you should think twice about ever double-crossing.

Be the first to review Radio Free Tresmigistus (The Witch Who Came In From The Cold Season 1 Episode 7). 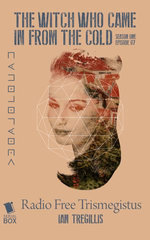