Being wicked never felt so good...

Born from hate and violence, Lathan knows all too well what darkness feels like. He's centuries old, and an abomination to the supernatural world. With a vampire father who forcibly took Lathan's werewolf mother as his own, Lathan's hybrid genetics make him feared by all.

Abbi has no one and nothing of importance in her life, but that doesn't stop her from living. When Lathan feeds on her and tries to use compulsion to make her forget, she realizes he isn't just a vampire, but something altogether different. He's also her mate.

Be the first to review Something Wicked. 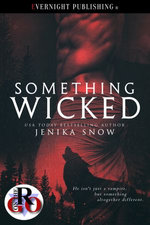