Detective Brad Steele solved a case involving the death of his partner, who was investigating a sex and bondage ring that catered to the perverse needs of the rich, powerful and famous of Southern California. During that investigation, he used Angie, an exotic dancer, to help infiltrate the ring and almost got her killed. After the trial, he fell in love with Angie and married her. Five years later, he finds himself restless.

The bondage action is non-stop and filled with surprises. If you are a David Jewell fan, this new book in the Behavioral Deviance, Sensory Maturation series is a must-read.

Be the first to review Soulmate. 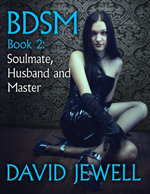