Soup is the New Coffee

Callie Rafferty is twenty-four, attractive with dark hair, but lacks self-assurance. She returns from two years travelling to set up a soup business Mad For Soup - with her best friend and aunt. They rent a converted mill in a wooded dell, and sell their soup from an old police box in the centre of Edinburgh. Ruby Rafferty is Callie’s retired aunt, offers Callie a place to stay and takes on the role of head chef with Mad For Soup. She is into line dancing and runs a lunch club. Devan Macleod went to uni with Callie - is her best friend and business partner. She is short, stocky with spiky pink hair and attitude. In between doing soup runs for Mad For Soup and sparring with Eric she works behind a bar with Arsehole Gary. Eric is taken on as part of the mill contract but has no desire, skill or ambition to work with Mad For Soup. He’d much rather stay at home reading a book and dabbling in merlin wizardry. His eccentricities include eating only orange food, spell casting and avoiding conversation - but turns out to be a souper-hero for saving lives and healing the public. Mr McGurk is a miserable, aggressive old man who lives in a run-down cottage next to the converted mill. His insolence towards Mad For Soup appears to be a cover for something sinister going on. Callie, Devan and Ruby are drawn in to investigating his disturbing behaviour and night-time activity. Verity Pringle is twenty-nine, glamorous, superbly confident and has established a successful corporate chain of soup outlets in Edinburgh Soup Bling. When she finds out that Mad For Soup is encroaching on her territory and loses a contract to them, she is furious and plots to shut them down. She never misses an opportunity to mention the numerous accolades she has received. Martin Hogg is a young, earnest, data analyst - brought in to advise Soup Bling. Verity quickly sets him off to spy on the competition and he falls in love with Callie in the process. Margaret is in her fifties and is Verity’s bungling PA, often getting it wrong but endlessly loyal to the bullying Verity. Soup Is The New Coffee is the story of two young women who fight for what they want. Callie the underdog - to get her soup business off the ground and to make it work with Martin; and successful Verity battling to stop her. The story builds towards the inaugural Scottish Soup award which magnifies their rivalry over soup and Martin. Mad For Soup clashes with both Soup Bling and the enigmatic, ferocious Mr McGurk, who is desperate to keep his secret hidden. As the story ends it appears as though Verity has won it all but has she?

LISA and ANTON STEWART (Hudson Valley, NY) have been practicing and teaching Wicca for nearly thirty years and, together, have birthed their own Wiccan tradition.

They own a metaphysical store called the Awareness Shop located in New Paltz, New York. They also operate a teaching coven called the Church of the Eternal Circle.

Be the first to review Soup is the New Coffee. 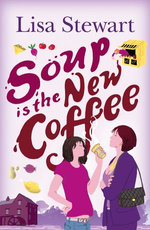 Soup is the New Coffee