Collects Star Wars: Qui-Gon & Obi-Wan: The Aurorient Express #1-2, Star Wars: Qui-Gon & Obi-Wan: The Last Stand on Ord Mantell #1-3, Star Wars: Aurra's Song #1, Star Wars: Jedi Council - Acts of War #1-4, Star Wars: Republic - Prelude to Rebellion #1-6, Star Wars: Vow of Justice, Star Wars: Darth Maul #1-4. During the time of the Republic, the Jedi Council guided the Jedi Knights as they upheld their values of peace and justice throughout the galaxy -- and the Sith waited in hiding for the right time to reveal their existence and take revenge...Collected here are tales of that time, shortly before The Phantom Menace: early missions of Jedi Knight Qui-Gon Jinn and his Padawan, Obi-Wan Kenobi; missions full of foreshadowing and increasing danger for noble members of the Jedi Council Mace Windu and Ki-Adi-Mundi; the Anzati-linked origin of Jedi-assassination specialist and bounty hunter Aurra Sing; and, last, Sith apprentice Darth Maul's own mission to clear the criminal system of any adversaries who could potentially hamper the rise and return of the Sith!

Be the first to review Star Wars Omnibus Rise of the Sith. 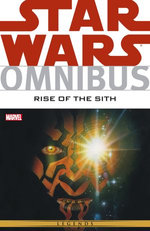