Collects Star Wars: Republic (1998) #49-54, 61, 63, 67, Star Wars: Jedi - Mace Windu, Star Wars: Jedi - Shaak Ti, Star Wars: Jedi - Aayla Secura, Star Wars: Jedi - Count Dooku. The Clone Wars explode across the galaxy! From the stormy seas of Kamino to the rocky hills of Devaron, the battle lines have been drawn, and the Jedi Knights who were once protectors of the peace must become generals, leading the clone armies of the Republic to war! These are the stories that were published immediately after the release of Attack of the Clones, featuring Jedi heroes Obi-Wan Kenobi, Anakin Skywalker, Mace Windu, and Quinlan Vos.

W. Haden Blackman is a writer and creative director who has worked across a wide range of media. He has been director and producer at LucasArts, where he led multiple teams of designers, engineers and artists in telling new interactive stories, and won numerous awards for outstanding video game writing from both the WGA and Academy of Interactive Arts and Sciences for his work on STAR WARS: THE FORCE UNLEASHED.

If you've read any Marvel series since 2009, chances are it featured a cover from artist Michael Del Mundo. Del Mundo's artwork has fronted such well-known series as AMAZING SPIDER-MAN and INVINCIBLE IRON MAN. His work also was featured on Marvel NOW! titles like DEADPOOL KILLUSTRATED, AVENGERS ARENA and X-MEN: LEGACY.

Be the first to review Star Wars Omnibus. 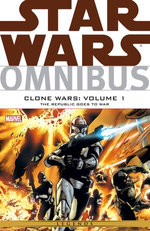