by Kathie Denosky, Rita Herron,  Alison Roberts and others

Self–made and every inch a bachelor, Sydney entrepreneur Mike Stone has one month to get married – or he'll lose a business deal worth billions! He's confident he can find a bride for the right price.

Natalie Fairlane, owner of the Wives Wanted dating agency, is appalled by her new client's proposition! But the fee Mike is willing to pay is very tempting. Plus, offering herself up for the job has nothing to do with how wickedly sexy she finds him…

One Night To Wed – Alison Roberts

Dr Felicity Slade has come to the small coastal town of Morriston to distance herself from the gorgeous paramedic Angus McBride. She's always known that Angus thrives on the danger of his job, and she's never been able to cope with the fear of losing him.

The last thing Felicity expects is to be plunged into an emergency situation with Angus. As they battle through the night to save lives, it becomes clear that this is Angus's last chance to prove to Felicity that he really is the right man for her.

His Marriage To Remember – Kathie DeNosky

Bria Rafferty is about to hand–deliver divorce papers to her husband when he's knocked unconscious. Now Sam remembers nothing of the past six months. He thinks they still live together at the Sugar Creek Ranch. That his money is all she needs. That everything is just fine.

To help him heal, Bria moves back home. But once there, she can't resist a stolen embrace…a stolen night. Can she bear leaving him a second time? Or will she find the courage to stay?

Up In Flames – Rita Herron

Southern summers were notoriously hot. But when a series of deadly fires blazed through the city, Detective Bradford Walsh knew he had to catch the arsonist before the city was reduced to a pile of cinders.

On the hunt for a killer, all roads led to one woman: Rosanna Redhill. But he couldn't let her smouldering glances distract him from his investigation. Because then he'd have another fire to extinguish…one that threatened to send them both up in flames.

After leaving her convent school, Miranda Lee briefly studied the cello before moving to Sydney, where she embraced the emerging world of computers.

Her career as a programmer ended after she married, had three daughters and bought a small acreage in a semi-rural community. She yearned to find a creative career from which she could earn money.

When her sister suggested writing romances, it seemed like a good idea. She could do it at home, and it might even be fun! She never looked back.

Be the first to review Summer Blockbuster 2017 - 4 Book Box Set. 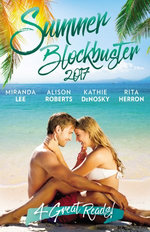 by Kathie Denosky, Rita Herron,  Alison Roberts and others