Jace Sterling works hard and plays harder, especially where it concerns the opposite sex. Women are his weakness, and he doesn’t try to express self-control when it comes to getting what he wants. But then he sees Lexi, a woman much younger than he is, and she has his full attention. He knows he just has to have her.

Lexi has wanted Jace since she was younger, but he’s over a decade older than she is and has never given her a second glance. When she returns to town after college and runs into the Sterling brother, the feelings she thought she’d buried come rushing back.

When a minor car accident puts Jace and Lexi back into each other’s lives, Jace knows he won’t walk away again, not when Lexi is the first woman to spark more than arousal in him. Everything he thought he knew about himself gets turned upside down where it concerns Lexi.

Can one young woman tame a notorious Sterling brother?

Be the first to review Takin' the Reins. 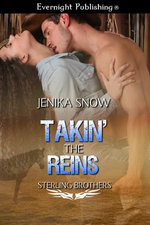