The Adventures of Brak the Barbarian Volume One

Of all the northern barbarians, none is more fearsome than Brak. Cast out by his tribe for daring to question their war-gods, he leaves the frozen north with plunder on his mind. Somewhere in the south, the legends say, lies Khurdisan—a golden land of sunshine, riches, and dark-skinned women. It will be a battle to get there, but battle is all Brak knows.

In Brak the Barbarian, Brak seeks refuge in Kambda Kai, a once-great city brought to ruin by its worship of the demon god Yob-Haggoth. So wretched is the town that even its children know dark magic, and Brak will have to be quick with his broadsword to survive.

In Mark of the Demons, Brak staggers across the desert of Logol, his pony dead, his food exhausted. There he meets a strange pair of highborn twins, whose throne has been stolen by a usurper. Can he trust them? He has no choice, if he wants to escape the wasteland alive.

This ebook bundle contains additional stories featuring Brak the Barbarian, as well as an illustrated biography of John Jakes including rare images from the author’s personal collection.

Be the first to review The Adventures of Brak the Barbarian Volume One. 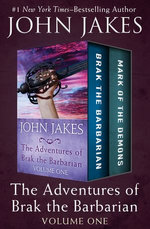 The Adventures of Brak the Barbarian Volume One

Sagas Fantasy Fantasy
Hold on while we process your request.