The Bag of Bones

by Vivian French and Ross Collins

The good witches of Wadingburn are worried – there's a new witch in town with a bag of magic bones, and she's so evil she makes their toes ache... Another fun-filled fantasty in the Tales from the Five Kingdoms stories that started with The Robe of Skulls.

Truda Hangnail is a very wicked witch, banned from the Five Kingdoms because of her use of deep magic. Then she comes up with a fiendish plan to restore evil to the Five Kingdoms, transforming the good witches of Waddingburn into shrivelled, wicked old witches who will help her take over King Frank’s kingdom on his fiftieth birthday. Luckily, a sweet-natured half-human, half-elf named Loobly is witness to Truda’s evil spell and sets off to fetch help. As the birthday party looms and Truda’s evil gathers strength, Loobly enlists the help of Prince Marcus of Gorebreath and Gracie Gillypot, as well as old friends Gubble the troll and Marlon and Alf the bats, to stop Truda and send her packing to the house of the Ancient Crones to face her just deserts.

Vivian French is a highly acclaimed children's author who has written more than 250 books during the course of her career, including Caterpillar, Butterfly, The Tales from the Five Kingdoms series and Yucky Worms.

Her recent work includes the critically acclaimed picture book The Most Wonderful Thing in the World and junior fiction The Adventures of Alfie Onion, The Cherry Pie Princess and The Witches' Midnight Feast.

Vivian teaches on the illustration course at Edinburgh School of Art, and helped to found the mentoring scheme Picture Hooks for aspiring young illustrators. She lives in Edinburgh

Ross was born in Glasgow, Scotland in 1972. As he grew up he was fond of drawing and precariously swinging backwards on chairs. He graduated from the Glasgow School of Art in 1994 with a First in Illustration.

In the same year he won the MacMillan Children's Book Prize. Ross spends his time writing and illustrating children's books, walking by Loch Lomond and precariously swinging backwards on chairs.

Ross can also be found scaring small children at book festivals and schools.

Be the first to review The Bag of Bones. 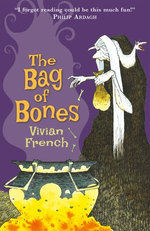 The Bag of Bones

by Vivian French and Ross Collins