The Beach Butler / The Professional (Storycuts)

In 'The Beach Butler' Alison's holiday is proving underwhelming. She has had to take her holiday on her own, and finds the seaside a bore - except for the attentions of the remarkably handsome 'beach butler'. A chance discovery, however, radically alters the atmosphere.

In 'The Professional' a young man has a menial job in the department store which is not particularly fulfilling, although it pays a wage and provides a chance to talk to the pretty shop-girls. But when a woman is murdered in the store, far more profound truths surface than would otherwise have been suspected.

Part of the Storycuts series, these two short stories were previously published in the collection Piranha To Scurfy.

Be the first to review The Beach Butler / The Professional (Storycuts). 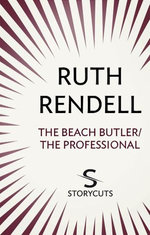 The Beach Butler / The Professional (Storycuts)