The Book of Never

The Book of Never (1-3) brings together Never's first three adventures as he searches for the truth behind his mysterious heritage and the curse on his blood.

Roguish Never is on a quest to lift a curse on his blood and to learn his true name; but upon joining a group of treasure-hunters he soon finds himself unearthing world-altering secrets that have long lain dormant within the mysterious Amber Isle.

A Forest of Eyes

Poisoned and furious, Never must add a desperate quest for a cure to his existing search for truth. His path takes him deep into the White Wood where he faces vengeful spirits, giant leeches and Commander Harstas himself, whose lust for revenge is an ever-present threat.

Armed with disturbing news about Snow, his unpredictable brother, Never picks up a cold trail on the rivers of Hanik. There he must face both new dangers and demons from his past, all the while doing his best to avoid becoming entangled in a brewing civil war.

Be the first to review The Book of Never. 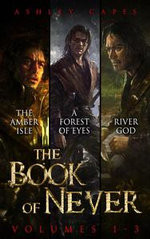 The Book of Never

Adventure Fantasy
Hold on while we process your request.