The Call of Cthulhu

Cthulhu Mythos scholar Robert M. Price claims the irregular sonnet "The Kraken", written in 1830 by Alfred Tennyson, was a major inspiration for Lovecraft's story, as both reference a huge aquatic creature sleeping for an eternity at the bottom of the ocean and destined to emerge from its slumber in an apocalyptic age.

S. T. Joshi and David E. Schultz cited other literary inspirations: Guy de Maupassant's "The Horla" (1887), which Lovecraft described in Supernatural Horror in Literature as concerning "an invisible being who...sways the minds of others, and seems to be the vanguard of a horde of extraterrestrial organisms arrived on Earth to subjugate and overwhelm mankind"; and Arthur Machen's "The Novel of the Black Seal" (1895), which uses the same method of piecing together of disassociated knowledge (including a random newspaper clipping) to reveal the survival of a horrific ancient being.

Be the first to review The Call of Cthulhu. 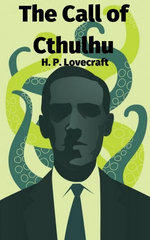 The Call of Cthulhu