In the year that Mount Vesuvius destroyed Pompeii, the Roman Centurion Vitellan set off for the twenty-first century as Imperial Rome's last human-powered time machine. He killed an unfaithful lover by just letting her grow old, but her hate pursued him across seven centuries. In 1358 he stood with a few dozen knights against an army of nine thousand to defend the life of a beautiful countess...and earned a love that would conquer death.

Now Vitellan has awakened in the twenty-first century, a bewildered fugitive, betrayed and hunted in a world where minds and bodies are swapped and memories are bought, sold, and read like books. But worst of all, a deadly enemy from the fourteenth century is still very much alive--and closing in.

At the Publisher's request, this title is being sold without Digital Rights Management Software (DRM) applied.

Be the first to review The Centurion's Empire. 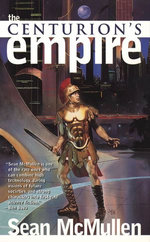