The City of Singing Flame

The City of Singing Flame by Clark Ashton Smith - two stories of adventure into parallel universes. Despite its weird beauty, and its function as a portal to the Inner Dimension, the Singing Flame of Ydmos must be destroyed.

A Plunge Into Nothingness

The Lure of the Flame

Chapter II Into the Flame

Clark Ashton Smith (1893–1961) was a self-educated American poet, sculptor, painter and author of fantasy, horror and science fiction short stories. He spent most of his life in the small town of Auburn, California, living in the small cabin built by his parents. He hated the provincialism of the small town life but rarely left Auburn until he married late in life.

In the early 1920s Smith found some limited fame as a poet. After publishing a long poem in blank verse, The Hashish Eater, or The Apocalypse of Evil, Smith attracted the attention of H.P. Lovecraft. They became correspondents and friends until Lovecraft's death in 1937.

Be the first to review The City of Singing Flame. 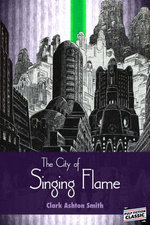 The City of Singing Flame

Fantasy Classic fiction Fantasy
Hold on while we process your request.