The old wall is a border: England and Scotland, South and North, light and darkness.

It is 1745, and the long-awaited night as come. The Bloodking calls his army to battle, and armed with the powers of the undead and the damned, he will bring them South to claim his birthright: The throne of Britain.

Only the old Watchers on the wall stand in his way. They, their swords, and their faith. But too much time has passed and the Watch has grown slack and ill-prepared for the coming war. Only Martin and Sean have seen the horrors that lie ahead for humankind. Only they have the power to stop it.

Now, two young officers of the Watch have a duty to perform:

Praise for The Coming of the King

Be the first to review The Coming of the King. 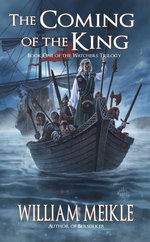