tournament and his loyal friend Hassan promises to help him. But neither

of the boys can foresee what will happen to Hassan that afternoon, an

event that is to shatter their lives. After the Russians invade and the

family is forced to flee to America, Amir realises that one day he must

In his second novel, A Thousand Splendid Suns, Hosseini

begins his story with Mariam, who is only fifteen when she is sent to

between Mariam and a local teenager, Laila, as strong as the ties

between mother and daughter. When the Taliban take over, life becomes a

desperate struggle against starvation, brutality and fear. Yet love can

move a person to act in unexpected ways, and lead them to overcome the

most daunting obstacles with a startling heroism.

Be the first to review The Complete Khaled Hosseini. 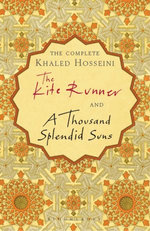 Fiction Contemporary fiction
Hold on while we process your request.