The G. K. Chesterton Collection (The Father Brown Stories, The Napoleon of Notting Hill, The Man Who Was Thursday, The Return of Don Quixote and many more!)

Gilbert Keith Chesterton (1874–1936) was an English writer. He wrote on philosophy, ontology, poetry, plays, journalism, public lectures and debates, literary and art criticism, biography, Christian apologetics, and fiction, including fantasy and detective fiction. Chesterton is often referred to as the "prince of paradox". Whenever possible, Chesterton made his points with popular sayings, proverbs, and allegories—first carefully turning them inside out. Chesterton is well known for his reasoned apologetics and even some of those who disagree with him have recognized the universal appeal of such works as Orthodoxy and The Everlasting Man. Chesterton, as a political thinker, cast aspersions on both progressivism and conservatism, saying, "The whole modern world has divided itself into Conservatives and Progressives. The business of Progressives is to go on making mistakes. The business of the Conservatives is to prevent the mistakes from being corrected." Chesterton routinely referred to himself as an "orthodox" Christian, and came to identify such a position more and more with Catholicism, eventually converting to Roman Catholicism from High Church Anglicanism. George Bernard Shaw, Chesterton's "friendly enemy" said of him, "He was a man of colossal genius".

Be the first to review The G. K. Chesterton Collection (The Father Brown Stories. 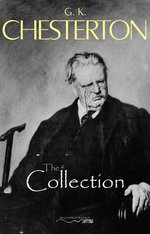 The G. K. Chesterton Collection (The Father Brown Stories, The Napoleon of Notting Hill, The Man Who Was Thursday, The Return of Don Quixote and many more!)