The Girl Who Was on Fire (Movie Edition)

by Elizabeth M. Rees, Terri Clark,  Bree Despain and others

Includes 3 brand new essays on Gale, the Games, and Mockingjay!

Katniss Everdeen’s adventures may have come to an end, but her story continues to blaze in the hearts of millions worldwide.

In The Girl Who Was on Fire - Movie Edition, sixteen YA authors take you back to the world of the Hunger Games with moving, dark, and funny pieces on Katniss, the Games, Gale and Peeta, reality TV, survival, and more. From the trilogy's darker themes of violence and social control to fashion and weaponry, the collection's exploration of the Hunger Games reveals exactly how rich, and how perilous, Panem, and the series, really is.

• How does the way the Games affect the brain explain Haymitch’s drinking, Annie’s distraction, and Wiress’ speech problems?

• What does the rebellion have in common with the War on Terror?

• Why isn’t the answer to “Peeta or Gale?” as interesting as the question itself?

• What should Panem have learned from the fates of other hedonistic societies throughout history—and what can we?

Jackson Pearce lives in Atlanta, Georgia. She is the author of a series of teen retold fairy-tales, including Sisters Red, Sweetly, Fathomless, and Cold Spell, as well as two stand-alones, As You Wish and Purity. As J. Nelle Patrick, she is the author of Tsarina.

In addition to The Doublecross and The Inside Job, her middle grade novels include Pip Bartlett's Guide to Magical Creatures, co-written with Maggie Stiefvater.

Jennifer Lynn Barnes has written more than a dozen acclaimed young adult novels, including Little White Lies, The Lovely and the Lost, and the Naturals series: The Naturals, Killer Instinct, All In, Bad Blood and the e-novella, Twelve. Jen is also a Fulbright Scholar with advanced degrees in psychology, psychiatry, and cognitive science. Jen received her Ph.D. from Yale University in 2012 and is currently a professor of psychology and professional writing at the University of Oklahoma.

Lili Wilkinson is the award-winning author of eleven YA novels including The Boundless Sublime, Green Valentine, Pink and Scatterheart.

After studying Creative Arts at the University of Melbourne, Lili established the insideadog.com.au website, the Inky Awards and the Inkys Creative Reading Prize at the Centre for Youth Literature, State Library of Victoria.

She has a PhD in Creative Writing, and lives in Melbourne with her husband, son, dog and three chickens.

Sarah Darer Littman is the critically acclaimed author of Backlash; Want to Go Private?; Life, After; Purge; and Confessions of a Closet Catholic, winner of the Sydney Taylor Book Award.

When she's not writing novels, Sarah is an award-winning columnist for the online site CT News Junkie.

She teaches creative writing as an adjunct professor in the MFA program at Western Connecticut State University and with Writopia Lab. Sarah lives in Connecticut.

Cara Lockwood is the USA Today bestselling author of ten novels, including I Do (But I Don't), which was made into a Lifetime Original Movie and Dixieland Sushi, which was loosely based on her experience growing up half-Japanese in a multi-racial family in Texas. She's also the author of the Bard Academy series for young adults. Her work has been translated into several languages. She's currently divorced and lives with her two daughters near Chicago.

New York Times bestseller Sarah Rees Brennan is the author of the critically acclaimed Unspoken, a romantic Gothic mystery. The first book of her Demon’s Lexicon series received three starred reviews and was an ALA Top Ten Best Book for Young Adults.

She lives in Ireland. Visit her at SarahReesBrennan.com. New York Times bestseller Maureen Johnson is the author of 10 YA novels, including 13 Little Blue Envelopes, The Name of the Star and The Madness Underneath. Maureen was named one of Time magazine’s top 140 people to follow on Twitter.

Ned Vizzini (1981-2013) began writing for the New York Press at the age of fifteen. At seventeen, he was asked to write a piece for the New York Times Magazine, and at nineteen, he published Teen Angst? Naaah…, his autobiography of his years at Stuyvesant High School.

His debut teen novel, Be More Chill, was selected for the Today Show Book Club by Judy Blume. It's Kind of a Funny Story, a cult classic, was adapted into a 2010 film starring Zach Galifianakis and named one of the 100 Best-Ever Teen Novels by National Public Radio. The Other Normals, his third novel, was a Junior Library Guild selection.

He was the co-author, with Chris Columbus, of the New York Times bestselling fantasy-adventure series House of Secrets. He wrote for the New Yorker and Salon. He also wrote for television, including MTV's hit show Teen Wolf. His work has been translated into twenty-five languages

Be the first to review The Girl Who Was on Fire (Movie Edition). 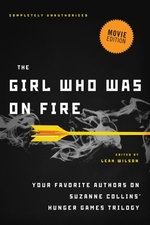 The Girl Who Was on Fire (Movie Edition)

by Elizabeth M. Rees, Terri Clark,  Bree Despain and others