The Gods are Athirst

“The Gods Are Athirst” (French: Les dieux ont soif, also translated as The Gods Are Thirsty or The Gods Will Have Blood) is a 1912 novel by Anatole France. It is a fictional story set during the French Revolution. The story of the infernal rise of Évariste Gamelin, a young Parisian painter, involved in the section for his neighbourhood of Pont-Neuf, The Gods Are Athirst describes the dark years of the Reign of Terror in Paris, from Year II to Year III. Fiercely Jacobin, Marat and Robespierre's most faithful adherent, Évariste Gamelin soon becomes a juror on the Revolutionary Tribunal. The long, blind train of speedy trials drags this idealist into a madness that cuts off the heads of his nearest and dearest, and hastens his own fall as well as that of his mentor Robespierre in the aftermath of the Thermidorian Reaction. His love affair with the young watercolour-seller Élodie Blaise heightens the terrible contrast between the butcher-in-training and the man who shows himself to be quite ordinary in his daily life. Justifying this dance of the guillotine by the fight against the plot to wipe out the gains of the Revolution, in the midst of the revolutionary turmoil that traverses Paris, Gamelin is thirsty for justice, but also uses his power to satisfy his own vengeance and his hatred for those who do not think like him. He dies by that same instrument of justice that up until then has served to satisfy his own thirst for blood and terror.(Excerpt from Wikipedia)

Be the first to review The Gods are Athirst. 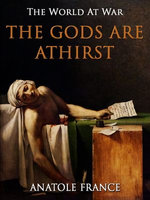 The Gods are Athirst