The Heart Of A Rebel - 3 Book Box Set

Dr Max McAdam isn't interested in an instant family. But how can he turn away scared, pregnant nurse Ellie Peters from his doorstep? And then, as he holds her tiny baby in his arms, Max's protective instinct kicks in — an instinct that makes him claim he's her husband. And saying the word husband feels more natural than he ever would have expected!

Renowned neurosurgeon and incorrigible playboy Rick Wilson has his sights set on Sarah — until she drops her bombshell: not only is her nephew his son, but the little boy needs his bone marrow! This roguish doctor is out of his depth, and only Sarah can help him on the rocky road to fatherhood.

Beautiful helicopter pilot Becca Harding has spent long years trying to forget Jet, but she's never been able to forgive him. But now, they're trapped together. For the first time in years, they have to stop running from the shadows of their relationship…and from the scorching attraction that lingers between them.

Be the first to review The Heart Of A Rebel - 3 Book Box Set. 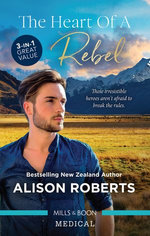 The Heart Of A Rebel - 3 Book Box Set