Five ordinary people must pay the price of survival at the end of the world.

A mysterious virus suddenly strikes down millions. Three days later, its victims awake with a single purpose: spread the Infection. As the world lurches toward the apocalypse, some of the Infected continue to change, transforming into horrific monsters.

In one American city, a small group struggles to survive. Sarge, a tank commander hardened by years of fighting in Afghanistan. Wendy, a cop still fighting for law and order in a lawless land. Ethan, a teacher searching for his lost family. Todd, a high school student who sees second chances in the end of the world. Paul, a minister who wonders why God has forsaken his children. And Anne, their mysterious leader, who holds an almost fanatical hatred for the Infected.

Together, they fight their way to a massive refugee camp where thousands have made a stand. There, what's left of the government will ask them to accept a mission that will determine the survival of them all--a dangerous journey back onto the open road and into the very heart of Infection.

"28 DAYS LATER meets THE MIST ... a definite page-turner right from the get-go all the way to the insanely intense final scene." -TheGOREScore.com

"Proves that just because it's 'indie' horror doesn't mean it can't stand alongside the greats. The book is simply stunning." -Rhonny Reaper, Dollar Bin Horror

"Gripping ... DiLouie carefully recreates our society and our military ... then proceeds to bring the horror, devastation, and heroes we require." - Fangoria

"DiLouie has created a vivid world of mayhem and destruction." -Doubleshot Reviews

"An entirely new way to look at the apocalypse." -ZombieSlam.com

"One of the best zombie books I've read." -THE FRINGE Magazine

"Beyond the regular apocalyptic novel." -LivingDeadMedia.com

"A frighteningly nightmarish twisting of the zombie formula." -AwilltoAct.com

Be the first to review The Infection. 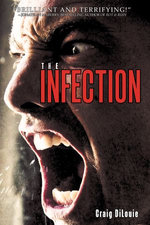