They came in their thousands. We fought them as one.

It started during a winter storm on the North Eastern Seaboard which brought with it a strange green rain. Where it fell, everything withered, died, and was consumed. The residents of remote outposts in Maritime Canada escaped the worst of the early damage, but that was a blessing in disguise, for they were left to watch as first North America, then the world, was subsumed in the creeping green carpet of terror.

And that was just the beginning.

Praise for The Invasion

"If you love apocalyptic stories that bring out the best in the human beings we root for, then you are going to love this story." - Clayton Bye, horror.thedeepening.com

Be the first to review The Invasion. 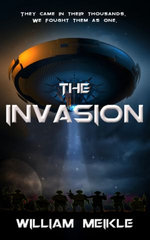